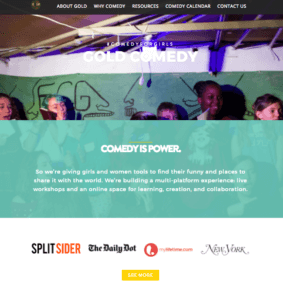 GOLD Comedy gives girls and women the tools to find their funny and the places to share it with the world. Through in-person workshops, an upcoming digital course, an online community, and (actually funny!) content, they foster both comedy skills and the life skills that come with them. Their mission is to amplify girls’ and women’s voices — literally, with a mic!

As a new start-up organization, GOLD Comedy needed to get their website from 0 to 60 so they could build brand awareness, drive workshop signups, and boost email signups. For this, they needed to move onto WordPress, refine their digital strategy, and increase traffic to the site.

Starting in 2017, Whole Whale became a digital partner with GOLD Comedy to expand their reach and augment their team in the digital realm.

As part of a larger digital strategy, Whole Whale migrated the GOLD Comedy site from a Tumblr MVP to a new, mobile-friendly WordPress installation. We gave the new site a fresh modern look and feel. This went in tandem with structuring the site to work as an engagement funnel, driving users landing on article pages to sign up for email or a workshop, attend a live event, and register for GOLD Comedy’s upcoming online course. Whole Whale also configured Google Analytics and Google Tag Manager on the new site to track these goal completions.

In order to increase organic traffic and brand awareness, Whole Whale devised a content marketing strategy to target teens, parents, comics, comedy nerds, and other individuals who would be interested in GOLD Comedy’s mission.  This work, which was operationalized for GOLD Comedy’s team of writers, increased traffic to their site by 10x.

As a new organization, GOLD needed to build their social media audience from scratch. We put together a social media “bible” with strategies for their day-to-day posting, influencer outreach, and live events. In a matter of 5 months, we saw a 169% increase in social media traffic.

Below you can see the increase in overall traffic after we started working together in June 2017. This includes our work on SEO which helped them 7x their organic traffic.

While the scale in terms of traffic is a bit different, we are especially proud of this case study as it is extremely difficult to build a social media audience from scratch in today’s crowded market. More importantly, these new users actually engaged with GOLD in a more meaningful way. The conversion rate for social media traffic increased from 2% to 7%.


Back to all Case studies